Rules of the Round Robin system

From the official invitation:

The  competitors of  the  categories  (pattern,  sparring)  will  be  divided  into groups  of  maximum  5  persons  with  seeded  draw.  In  every  group  every competitor of the group should fight with every competitor. The two best competitors  of  the  group  will  get  into  the  pyramid  system  elimination round. The  two  bests  from  one  group  will  be  seeded  to  the  opposite branch of the pyramid elimination table. The result of the pyramid system elimination will be the result of the category.

As draws are possible in the group stage of the round robin system, two or more participants might finish with equal points. In this case the umpires will apply the following criteria to determine the rankings:

Past Editions of the Eagles Cup 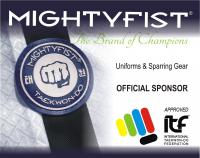